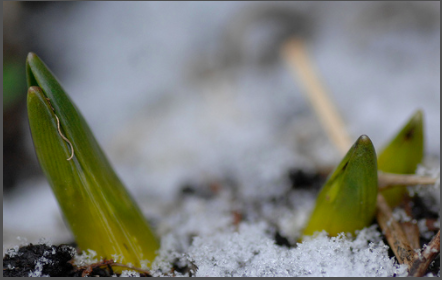 This Sunday, we’ll turn our clocks forward – and be reminded by the “extra” light of late afternoon that spring really is near. Maybe you’ve already seen the first shoots of green emerging from bulbs nestled in warming soil or the early blossoming of trees. 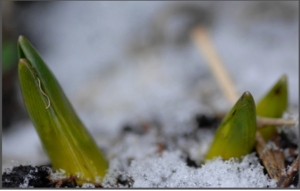 Everything that’s lain dormant through the cold and stormy months begins to reassert itself – to manifest.

Through recent years, that word’s been thrown around a lot with respect to personal growth, with various folks insisting we can each “manifest” our “ideal reality.” The mind is powerful, they say; focus on what you desire, channel your thoughts and it will all come to be.

Consider the word “manifest.” It comes to us from two Latin words, manifestare and manifestus, and each has a slightly different meaning. The first refers to disclosure, bringing something into the open. The second refers to the state of being out in the open, apparent, clear.

Both, however, imply that something already exists.

These antique meanings remain at the heart of our modern English term. Manifestation is not about making something from nothing but making present that which already is. It is an action.

One powerful means of preparing for that action is visualization. Indeed, the two go together – a matched pair. Visualization without action is nothing more than wish-making or daydreaming. With action, as Dr. David Krueger writes in Outsmart Your Brain: An Instruction Manual, visualization

crystallizes possibility into an articulated idea…. A vision serves as guide and inspiration to design ways to realize it — to live into it.

More than a plan, visualization offers a way to “pre-experience” what we want to achieve: through imagining ourselves achieving that preferred outcome in vivid detail – not just the “visual” but sound, taste, touch and smell, too. The more specific your vision, the more real it seems in your mind, the more likely we will “default” to it when it comes time to act.

I was recently introduced to a story that wonderfully illustrates this point. It was about a Vietnam POW whose primary survival strategy against insanity during 7 years of cramped confinement was to visualize his golf game.

Every day, he played a full 18 holes at the imaginary country club of his dreams. He experienced everything to the last detail. He saw himself dressed in his golfing clothes. He smelled the fragrance of the trees and the freshly trimmed grass. He experienced different weather conditions – windy spring days, overcast winter days, and sunny summer mornings. In his imagination, every detail of the tee, the individual blades of grass, the trees, the singing birds, the scampering squirrels and the lay of the course became totally real.

He felt the grip of the club in his hands. He instructed himself as he practiced smoothing out his down-swing and the follow-through on his shot. Then he watched the ball arc down the exact center of the fairway, bounce a couple of times and roll to the exact spot he had selected, all in his mind.

During his first round of golf after returning home from the war, this previously amateur golfer shot a 74.

There’s no magic to this. Like all mental processes, visualization simply changes the brain. As Dr. Krueger notes, it creates a “’future memory’ to live into.” Your brain doesn’t distinguish between that and a lived memory: Both are equally real. “The more detailed your visual image,” he adds, “the more specifically etched your brain will be.”

It’s key to begin with a goal: clear, specific, concrete and positive. For many, stating a goal in those terms can be a challenge in and of itself. If that’s the case, start more abstractly. What do you want to achieve? A higher level of physical fitness? More time for relaxation and pursuing your own interests? Accomplishment and recognition at work? More fulfilling personal relationships? What would that entail? How will you know when you achieved it? What will your life look like once you have achieved it?

With that last question, you’ve entered the realm of the concrete. You’re ready to articulate your goal.

“Having a simple, clearly defined goal,” write Sam Parker and Mac Anderson, “can capture the imagination and inspire passion. It can cut through the fog like a beacon in the night.”

Images via Flickr: plants by postbear,
eye by Bill Hails